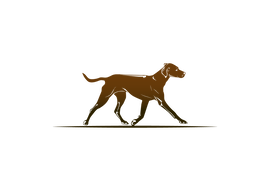 The Rhodesian Ridgeback originated in Rhodesia now known as Zimbabwe, Africa. They began by breeding European settlers dogs with the African semi-wild dog the Hottentot. The desirable traits of the Great Dane, Mastiff, Greyhound, Saluki, Terrier, Bloodhound and more were used to develop the breed we know today. This new breed needed to be able to flush fowl, hunt big game and guard the farm and the family from animals and prowlers at night. Full History

Rhodesian Ridgeback - CKC Official Breed Standard
Who should have a ridgeback?
Ridgebacks are intelligent, tenacious, independent thinking and even pre-meditated. In most cases this breed should not be for a first time dog home. A Ridgeback needs a firm but fair consistent leader. Being the leader is a must with a Ridgeback, but this doesn't mean being a tyrant. Hitting or harsh corrections with a Ridgeback will have the exact opposite reaction you are looking for. They are a sensitive, highly social breed (within their pack). If you are looking for a dog that you can just leave out in the back yard then a Ridgeback is NOT the dog for you. These dogs need an owner who is willing to have an additional family member which requires daily exercise both physically and mentally. What you need to know most about this breed is their absolute need for your companionship. The building and sharing of trust and respect is a two way relationship and is only achieved through mindful time spent together. They can be prone to separation anxiety and depression if much time is not spent with them meeting their needs. A Ridgeback owner also requires a pretty good sense of humour, because Ridgebacks can and do decide for themselves. For some reason they don't always make the best decisions! An untrained Ridgeback can be a menace, however, a well trained Ridgeback will possibly be the greatest dog you will ever own, just ask any seasoned Ridgeback owner.

General Info
The Rhodesian Ridgeback is a highly versatile breed, used for hunting, exercise companion, protection, family companion, tracking, working farm dog (herding), lure coursing and performance trials.
In Canada the CKC classifies Ridgebacks as a scent hound, however in other countries their classification can vary such as in the USA, the AKC classifies them as sight hounds. Arguments can be made for each classification because they perform well both with tracking and coursing. Both senses are highly developed in a Ridgeback.

Temperament
Ridgebacks are a very dignified breed and considers themselves your equal and most decidedly not your slave. If you are looking for a dog that will "jump with willingness" when you give a command, the Ridgeback may not be for you. A Ridgeback needs time to assess your command and decide whether or not it is in their best interests to listen. They are NOT a retriever. A Ridgeback is far too dignified to play a game of fetch...it makes no sense and you'll end up with the dog staring at you wondering why you keep throwing the ball.

Generally this breed is very calm and well behaved in the house as adults. Many people have told me "its amazing how calm your dogs are", well that is only because they haven't seen them when they exercise. They do have a very even temperament. However, if a Ridgeback is left unexercised they will get bored and can become quite destructive. Early and often training will help them be aware of what they are allowed (doggy toys) to destroy and what they are not. There are not many toys on the market that can stand up to the tenacity of a bored ridgeback, you may need to budget for some learning toys. A Ridgeback is quite content to laze around with you and find the comfiest spot in the house as long as they are exercised regularly. He is also just as content to run a marathon and wonder why you're so tired at the end.

The Ridgeback is quite confident and can come across as fearless. Even if they are a little frightened they will always moved forward to any threat. They are instinctually very protective of family and loved ones. It really is amazing to watch when you figure out their subtle language of protection. However, sometimes they are not so subtle and can be a very formidable force. For this reason it is essential that socialization starts DAY 1 with a Ridgeback. We like to use the rule of thumb of meet 3 new people and other living creatures, every day for the first six months at least. Even better is the first year of their life. Meet people with hats, beards, tall, robust, people with canes etc. Put your Ridgeback in a variety of situations where they are safe and able to learn. I cannot express this point enough...early and ongoing mindful socialization provided for this breed is essential. For the most part you have one shot with a Ridgeback, you need to make it count. The payoff will definitely be worth the effort.

Harsh discipline will ruin this breed. Fair and firm corrections are the key to having a solid relationship with them. Kindness, a sense of humour and never bending the rules. Bent once and that is no longer a rule - it becomes merely a suggestion to a Ridgeback.

The Ridgeback was essentially bred to tease/bay. They were used to hunt big game in packs of 2-4. They would travel ahead of the hunter, track and bay the prey until the hunter arrives. The pack would take turns diving in and out at they prey until it tires, all part of the super fun game for a Ridgeback. That trait is still very prevalent in the breed today and Ridgeback owners need to know they LOVE to tease other breeds. It's like they get a charge out of scaring the pants off of other dogs...but for a Ridgeback its all in fun. This can spur attacks from the breed not appreciating their exuberance. It is quite amazing how Ridgebacks recognize their own breed and will instantly pack and team up to tease other breeds. It really isn't fair because typically a Ridgeback is far faster, stronger and more agile...and they know it. This is NOT a behaviour that you want to encourage your Ridgeback to participate in, for the sake of the other dogs and owners. Ridgebacks play at a whole different level that many do not understand.

My favourite attribute of the Ridgeback is their loyalty to the family. When this breed gives you their friendship, it is unwavering and forever. They typically love children if they are raised with them but should still always be supervised during play. Children should be given firm boundaries as to what type of behaviour is acceptable in how to treat and interact with a Ridgeback of any age. A Ridgeback is a large strong dog that can push over children with ease. You may find your Ridgeback sitting on your feet, trying to sit on your lap and sharing your bed. They are fantastic with children but children must be taught respect. Children of any age must not be allowed to invade their crates and dog beds. Respect for the down time a Ridgeback needs.

Exercise
A Ridgeback requires daily exercise. They do best with a large secure FENCED yard. A minimum of 6' tall is a must.  For a younger Ridgeback a daily walk will not cut it. They need to be able to stretch their legs and run off leash, in a safe manner at all stages of life. You may find your Ridgeback running figure 8's in your back yard. Keep this in mind when deciding the landscaping that they might like to tear up.

Nutrition
A Ridgebacks food needs to be controlled. They will always try to convince you that they are hungry and need more food. DO NOT free feed a Ridgeback. Feed twice a day in controlled portions. Puppies have different feeding requirements. An overweight Ridgeback is an unhealthy Ridgeback. At Luxe Rhodesian Ridgebacks we feed a full balanced raw diet. We can help with getting you accurate information about feeding a raw diet. Feeding raw can be close to the equivalent to feeding a quality kibble for price. However, the health benefits of feeding raw are unmatched with any kibble on the market. We even feed our two little Chihuahua's raw. Please feel free to contact us for additional information, we are happy to help people learn proper nutrition. ​There are a number of healthy treats for our dogs. Absolutely no rawhide, however there are lines of similar products that are digestible. Sometimes they like to think your sock, toys or your sofa are fabulous treats as well !

Breed Specific Health
The Rhodesian Ridgeback is generally a very healthy breed. There are a few health issues to be aware of. A reputable breeder will be well aware of the breed specific health issues and be able to help with any of your questions. It is standard practice for reputable breeders to health test the breeding lines to the Orthopedic Foundation for Animals (OFA) standards and post them for all to see. This is one of the major differences between a backyard breeder and a breeder trying to progress the breed by eliminating inherited genetic disorders.